Family Games for Fun and Learning 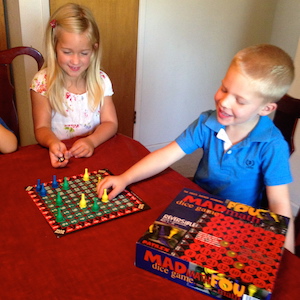 The most essential factor in playing a game is fun. No one wants to play a game that isn’t fun. If a game is too complicated or too slow or even too simple for the some of the players, they will probably refuse to play. This can make choosing a family game a little complicated. You need something simple enough for your 3- or 4-year-old, yet interesting and challenging enough so Dad doesn’t fall asleep and your teen doesn’t completely zone out into the nearest hand-held device. Believe it or not, this is not the impossible dream. There really are unplugged games that can fill this bill.

For starters, let me introduce Ruckus from Funstreet, Inc. This card game targets age 7 to adult, but my 3- and 5-year-old grandchildren play it with gusto. The genius of Ruckus lies in its counter-intuitive game rules that give the slowest player the advantage. Typically, older players cannot resist making swift moves, which in Ruckus can work to the advantage of younger, slower players.

The game consists of cards with a number of rather wacky designs in the corners. The object is to collect as many of one design as possible by “stealing” them from other players’ table cards. There are a series of mad grabs (no taking turns here) in each round and the last one to seize a stack gets to keep it. Although it is advertised for 2 to 4 players, it is also fun with 5 to 8 players; they just have to be able to reach across the table to grab the cards they want. It is pandemonium – and lots of laughs. If you try it with a big family, I do recommend that some teen or adult is available to “help” the pre-schooler reach those cards across the table.

The educational value in Ruckus is twofold. First, young children learn to recognize and identify different designs, a valuable pre-reading /visual discrimination skill and second, folks of all ages learn to give and take as the cards fly around the table.

Ruckus is a relatively new game using an unusual format. However, many of the old, traditional card games like Go Fish, Old Maid, Concentration and Rummy are classics because they are so much fun for all ages to play. They have stood the test of time because of their use of strategy, memory power, and skill, yet they are simple enough for most pre-schoolers to understand and play (with a little coaching when needed).

Birdcage Press took advantage of this fact in creating a line of educational games that teach Art Appreciation, History and Science. They are already known for the stunning graphics in their Go Fish For Art series which includes card games for Renaissance, Impressionists, VanGogh and Friends and Modern Artists. 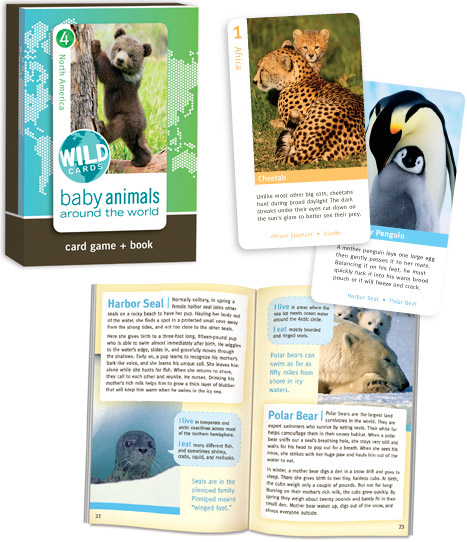 Recently, Birdcage came out with four new games in the Wild Cards series. Baby Animals Around the World is a card game that comes with a little 25-page book about the 18 adorable animals featured on the 36 cards. You can play three different classic card games and learn quite a bit about the animals of five continents plus the polar regions. The suits are labeled by continent or the poles, so you learn geography and science unconsciously as you play. In addition to the continent label, each suit has a numeral (1-6) in the upper left-hand corner. Animals from Africa have a yellow numeral 1 in the corner, animals from Asia have a red 2 in the corner, and so on. Thus, my non-reading grandchildren can collect suits by color or numeral. Older children and adults will enjoy reading the informative paragraph about the animals on each card.

Wild Cards Dinosaurs uses the same format and also includes a little book containing descriptions of each of the dinosaurs. With these cards, you can play “Old Dinosaur,” “Jurassic Memory” and “Go Dig for Dinosaurs.” My 3-year-old granddaughter likes “Jurassic Memory” best because she is such an ace at remembering where things are in the array on the table. This is one area where I have noticed that very young children can often outperform teens and adults.

Don’t ever think that card games such as these are a waste of time for your older children. If they enjoy them, encourage them to play. “Old Dinosaur” may be a simple classic game, but it is a good introduction (or review) to a study of dinosaurs.

Also new from Birdcage is the Battle Cards series which includes Spacecraft, Military Jets and Aircraft. These cards teach kids (and adults) about the history, features and uses of aviation technology. These are fast-paced games based on the classic “War” card game. You can play different versions using the 5 facts on each card. You will learn the history of aviation from pioneer biplanes to the latest super-jumbo jet. At each turn in the game, a different plane may win. One may fly faster while another flies higher or farther. Some reading is required so this series is for age 6 and up unless an older person teams up with a non-reader.

Venturing into ancient history, Birdcage has come out with the Go Fish for Ancient Egypt card game and book. In addition to beautiful photos of ancient artifacts, the cards in this game contain a wealth of vocabulary and information about ancient Egyptian rulers and culture. If you haven’t studied Ancient Egypt yet, this little card game will go a long way toward whetting your children’s appetite for a study in greater depth. If you have learned about ancient Egypt already, playing a game like this from time to time will stimulate further discussion and solidify memories. Please don’t feel that you need to play a game about ancient Egypt only while you are studying it or a game about reptiles only when you are studying river life. Children (and adults) don’t learn and remember in neat little columns like you see in the typical scope and sequence. If you only mention the ancient world when it shows up in the history book or the study guide, your children won’t retain much. Most things have to be revisited numerous times (educational psychologists say at least seven) before they stick in the memory. That’s the beauty of games. You can revisit and review things studied in the past while adding variety to your day.

Another wonderful advantage to playing a wide assortment of games is that we remember things better that have an emotional connection. It has been discovered that the part of the brain that stores memories has a close connection to the part where emotions are housed. When children are excited and having fun, they tend to remember more about that experience. Accordingly, it is important to keep the game time fun. If interest is waning, drop it and do something else. Keep a variety of games on hand and don’t be afraid to change the rules or even invent a totally new way to play. If your children get antsy, add movement to the game by requiring a run around the table when you score a certain number of points, or make a funny face when you pass a card, or make the animal noise when asking for (or finding) an animal pair. If you have forgotten how to be creative, set your children loose. Tell them they can make up new game rules and then try it out that way. If the new format doesn’t work, you don’t have to play those rules again; make up another variation. Anything that is fun and fair is good.

Once your children have become familiar with the information on the cards, you can use them for a guessing game in the car. Have one child pick a card and read some of the information about the subject for the others to guess. If you are using Baby Animals Around the World, name the continent and see if the other players can guess the animal. Or, name the animal and ask the other players to name the continent or region it comes from. You can play similar games with any of the card games mentioned above. When the game cards contain rather obscure information, have the reader continue to give additional clues until someone can guess the subject. You can keep score if you wish, by handing the successful guesser the card; the player with the most cards wins the game. However, we have found that it is just as much fun to play without keeping score.

Above all, try not to fall into the trap of thinking that playing a game is just for fun and diversion. Never feel guilty for playing games when your children could be reading or filling in a workbook. Many times a game can be more productive than a workbook in accomplishing a learning goal because happy learners remember better.